History of the Cant Dog & the Peavey

A Note: This work is not yet finished, and more updates as well as a type-study of known Peaveys and cant-dog styles will be added soon.

Author Note
Particular thanks must be given to The Museum of Maine Made Edge Tools, the University of Maine Raymond H. Fogler Library, the Davistown Museum in Liberty, Maine, the Patten Lumberman’s Museum, Mr. Howard Hardy of Oakland, Maine, Mr. Reggie Rackliff of Industry, Maine, and Mr. Robert Lawrence of Brewer, Maine.

The cant dog and peavey are terms often used interchangeably now in Maine. Though they are different designs on the same basic principle, the latter is a newer invention (1857). The most basic design that can be called a cant dog is also known as a swing-dingle, and is simply a swivel-hook on a solid wooden pole. It is unknown who, or when, this invention first came about, though some sources claim a German origin. It is easy to imagine what a revolutionary tool it was, allowing for much easier movement of logs. It is apparent from studying items in the collection of the Museum of Maine Made Edge Tools that from this earliest of cant dog styles came a number of designs, some including other metal rings and plates encircling the wooden pole to give more purchase when working the logs. Then came designs with a hook that moved vertically but had no horizontal motion, thereby creating more ability for leverage and less possibility for slipping. In addition to these designs, were cant dogs with toothed steel plates on the bottom for better grip into logs, and cant dogs with what are known as a crow foot end, two curved teeth to dig into and hold the log.

As mentioned earlier, the peavey was invented in approximately 1857. Its inventor, Joseph Peavey, then of Stillwater, Maine, was a blacksmith. Mercer (1975) is incorrect in his assertion that Peavey was from New York state. This unfortunate inaccuracy has been repeated by those who obtained their information from his book. According to Fannie Hardy Eckstorm, in a retelling of a story told to her by a descendent, Joseph Peavey stood on a bridge over the Stillwater River, and watched the men with their inefficient swing-dingles working the log drive. He thought about what could be done to make their work easier, and when he returned to his smithy he set to work immediately upon his idea. Upon completion of his first prototype stories differ, some saying he walked to the post office with patent drawings in hand, stopping at his friend and fellow smith Mansfield’s home in Orono. This is where the story gets a little blurry, as some claim Mansfield took those drawings and mailed them himself, though no patent has ever been found in either man’s name.

In 1880 Charles A. and James H. Peavey, of Bangor, and Hiram Peavey of Veazie patented what they called the Bangor Rafting Peavey. This was an improved version: “in constructing this pick we form the point connected to and integral with the socket, and tapering from the tip up…” The patent was reissued in 1883 with additional improvements. 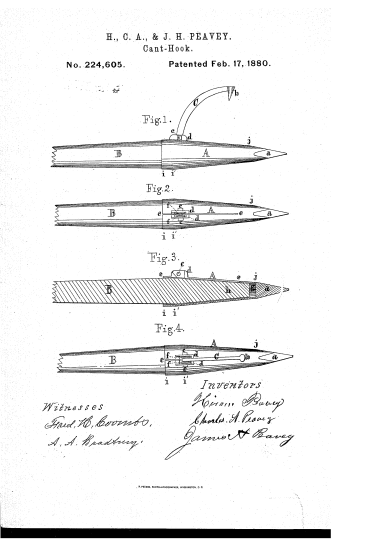 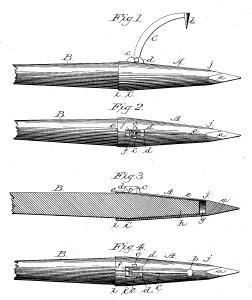